The Royal Ontario Museum’s (ROM’s) new Dawn of Life exhibit opened this past fall. Many years in the making, this superb display of (mostly) Paleozoic life fills a huge gap that had heretofore existed in the museum’s exhibits: an overview of invertebrate fossils that is both broad and deep, with a focus on fossils from Canada and Ontario in particular.

I had long lamented that Ontario’s premiere natural history museum lacked a display of Ontario fossils,   so when they announced this new exhibit, I was excited about it. I had an opportunity to see it last fall, and I’m finally finding the time to write about it now. A highlight of the gallery are display cases full of Ontario’s exceptional invertebrate fossils, including many from my favorite locale in Arkona. I’ve spent a good deal of time collecting fossils there as well as reconstructing some of the Arkona fauna through my illustration work. Because of this personal connection, I’m happy that the opportunity arose to license one of my Arkona illustrations to the ROM for their new exhibit: 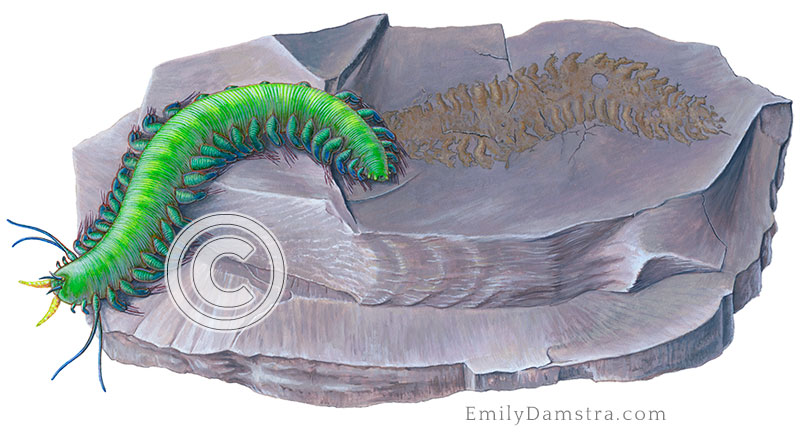 In 2009, I  illustrated this incredibly rare and unique Devonian polychaete Arkonips topororum for the two brothers who found it—Mike and John Topor—and after whom it is named. They realized it was something special and they donated it to the University of Michigan Museum of Zoology for study. The specimen is exceptional because, unlike the vast majority of the Arkona fauna, this is an entirely soft-bodied animal that somehow managed to become fossilized. My gouache painting shows both the pyritized fossil in its Arkona shale matrix and a reconstruction of the polychaete, crawling on the shale. Creating this work involved a deep dive into polychaete anatomy, which was completely new to me, along with a careful study of the scientific paper describing the fossil, and questions answered by one of its authors. This type of research is typical for invertebrate fossil reconstructions, and is one of the reasons I so enjoy creating them. 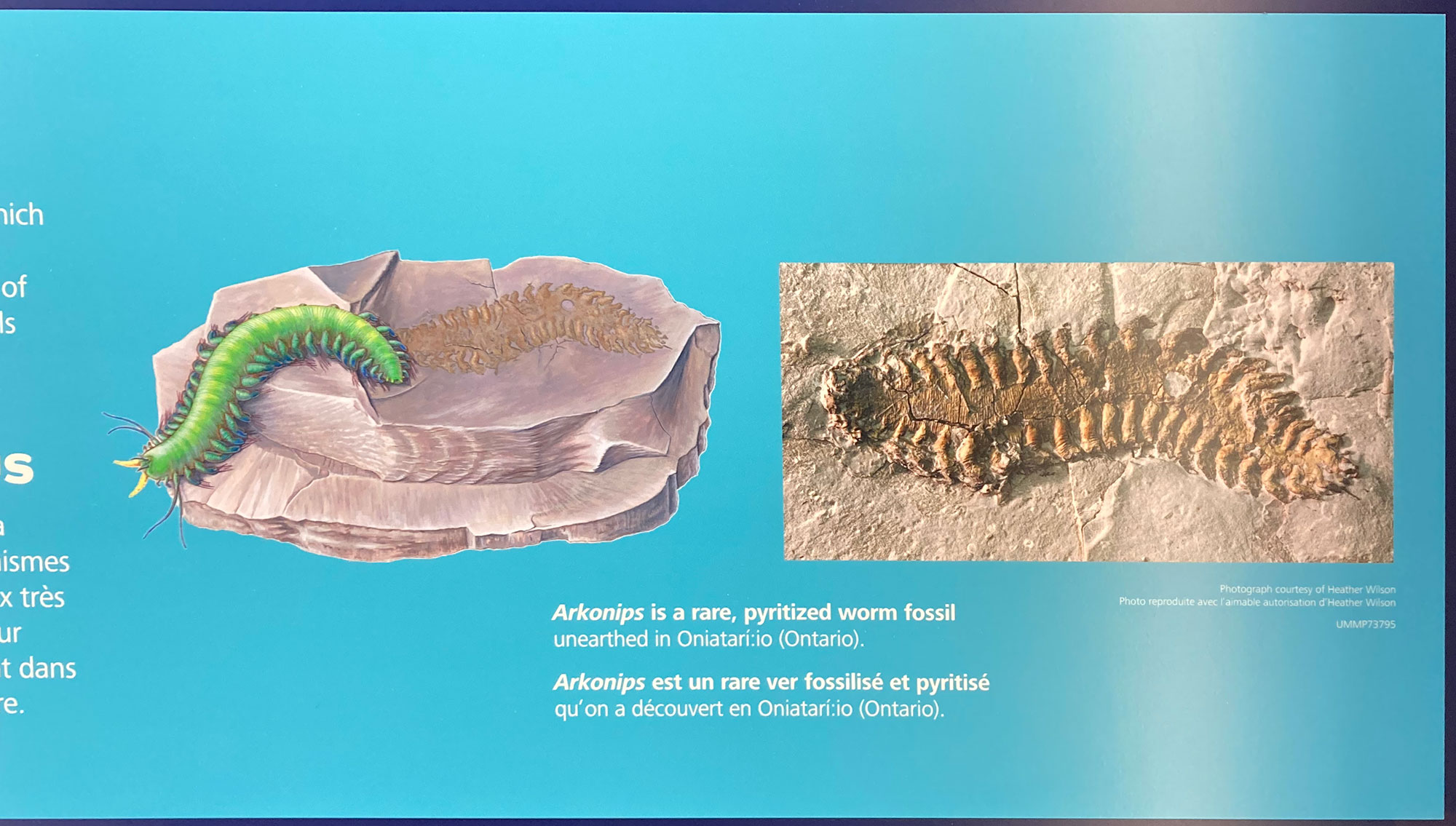 More of my Arkona fossil reconstructions can be seen on this page.

Along with the excellent displays of Ontario fossils, the new ROM exhibit explores Canada’s famous Burgess Shale fossils in depth. ROM researchers have been at the forefront of studying this amazing biota for many years now. Using interactive displays, visitors can discover more information about the fossils on exhibit. In one of those displays, I was delighted to find my illustration of Gyaltsenglossus senis, a Burgess Shale species that I reconstructed in 2019 and wrote about here. 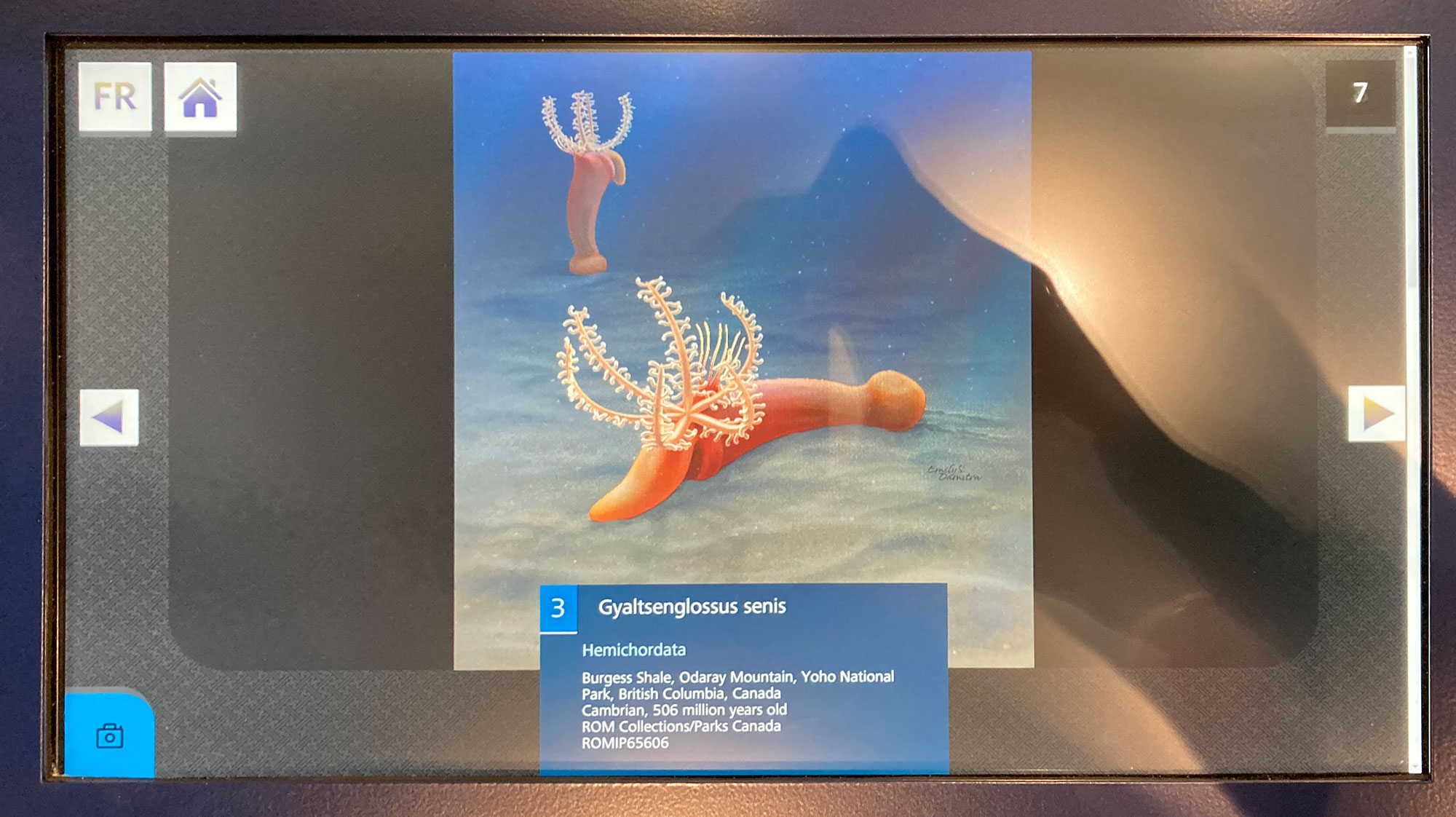 A photo of the display with my illustration of Gyaltsenglossus senis

If you’re curious about early life on earth or if you love fossils, this wonderful new exhibit is worth a visit. Accompanying the fossil specimens are a variety of reconstructions, such as a life-size Dunkleosteus, numerous gorgeous murals, and a fantastic room-size animation of life in the Cambrian. 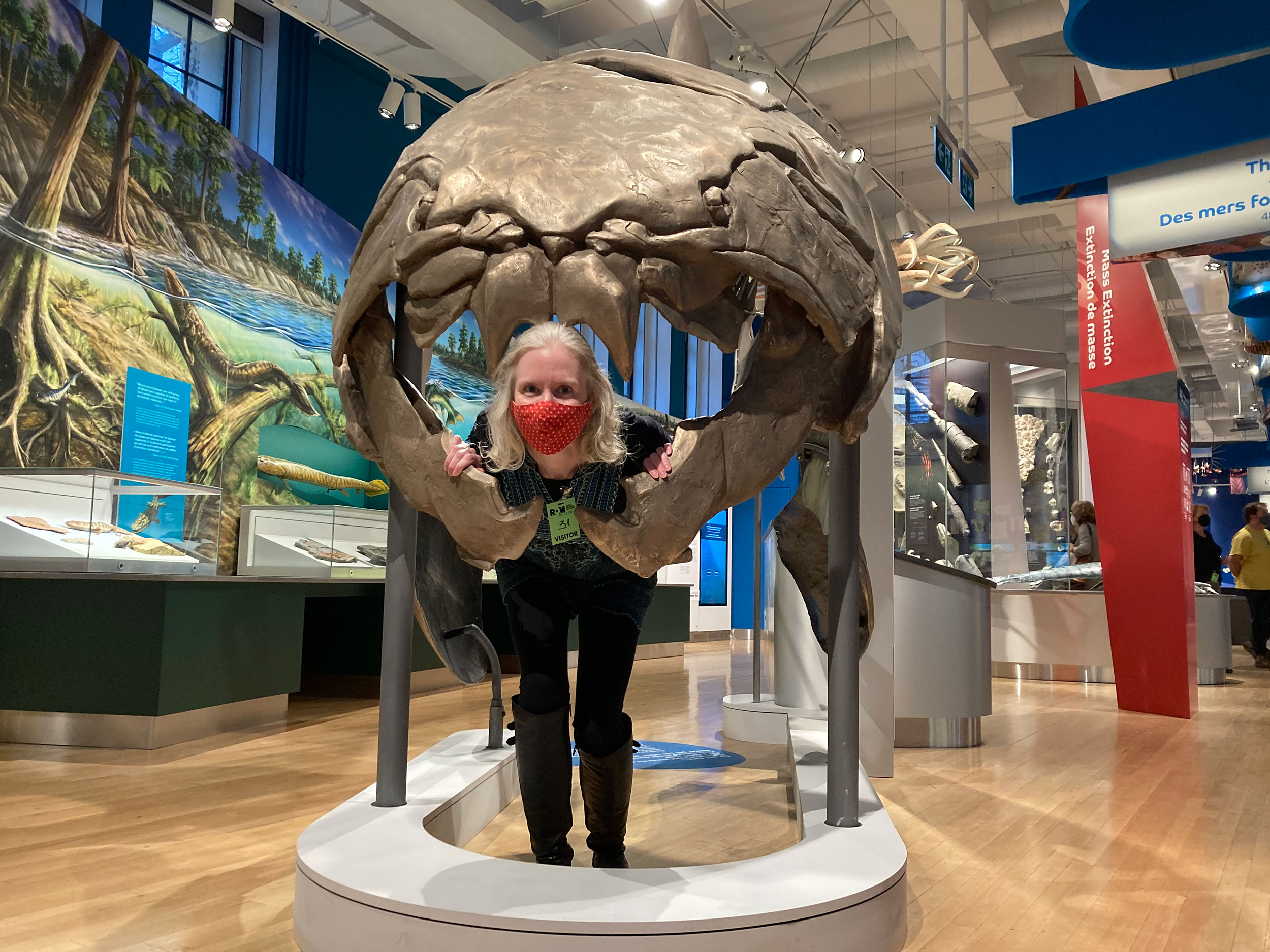 Here I am in the mouth of Dunkleosteus!

Hi Emily, that’s so cool that your illustrations can be used again to help educate the public like that! Your work is so beautiful…

Wonderful, Emily — so glad some of your superb work is included!!

Fantastic, Emily! I can’t wait to go see it in person.

Thanks! I know you’re gonna love this new exhibit, Glendon. 🙂