In 1986, the United States Mint began selling one ounce silver coins as bullion, meant for precious metal investors. The obverse (heads side) of this coin bears the classic “Walking Liberty” design by Adolph A. Weinman, first used on half dollar coins from 1916 to 1947. Many collectors revere this image. United States Mint sculptor/engraver (and later Chief Engraver) John Mercanti’s superb rendering of a heraldic eagle distinguishes the reverse. The Mint also produces versions of this coin in Proof and Uncirculated finishes, aimed at collectors.
To mark the 35th anniversary of this American Eagle coin program, the United States Mint is changing the design on the reverse side of the coin. Beginning this year, the reverse will feature a new design of a bald eagle, one that I’m excited to say that I designed. 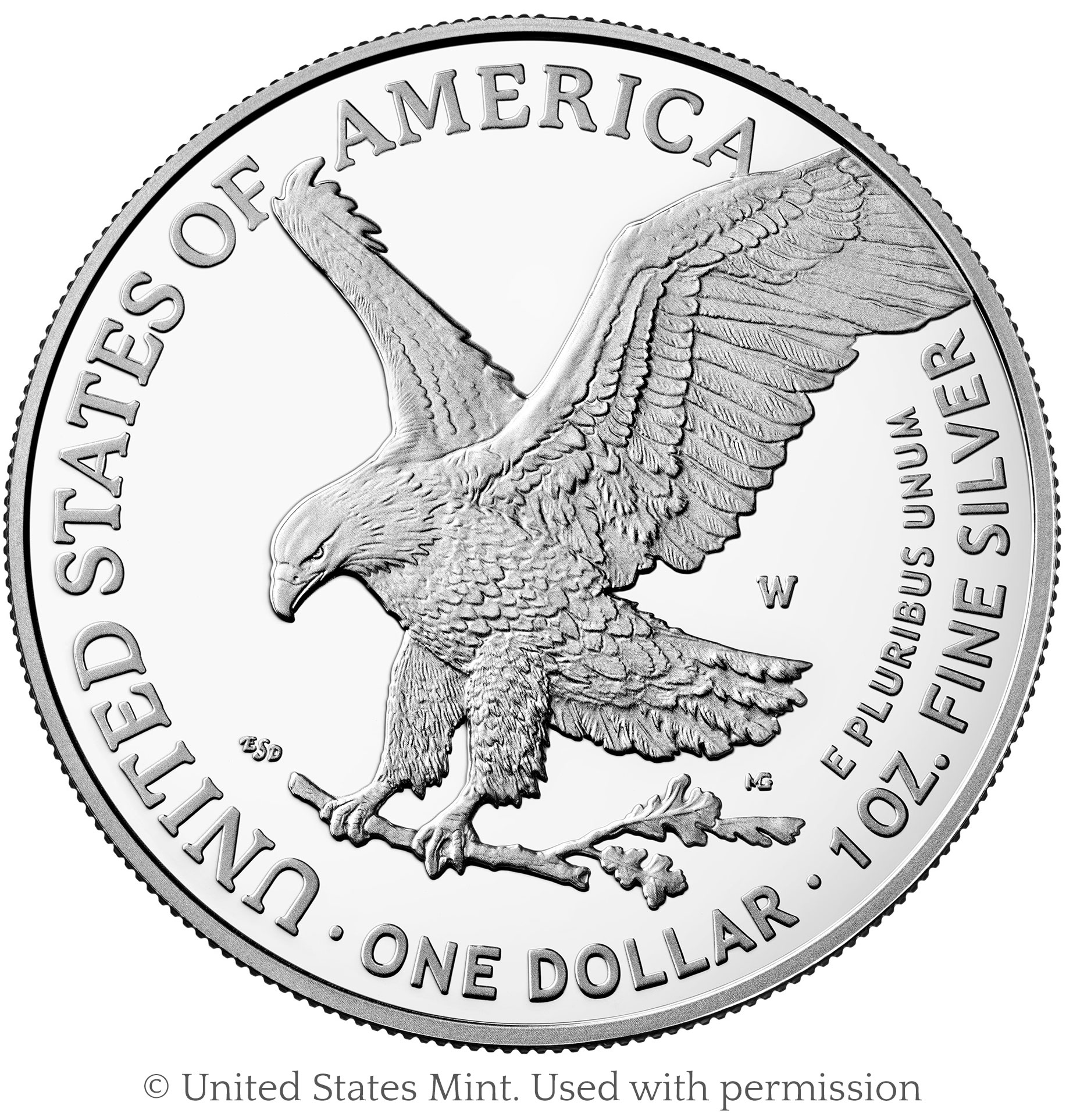 The opportunity to design a coin featuring America’s beloved national bird was an occasion I treasured because the bald eagle is my favorite American symbol. As a student of natural history, I love that it is a symbol from nature. It also resonates with me because it is a truly American icon—a species endemic to North America and a symbol with American origins. Further, this bird’s symbolism needs no explanation; the values we associate with it—such as strength, majesty, dignity, and liberty—are readily apparent to anyone who sees one, or even just images of one. I’m in awe every time I see this species.

My inspiration for this design grew from a desire to show our national bird—with all of the values it embodies—in a unique way that could also convey traits such as diligence, cooperation, care, and protection. For that reason, nest-building came to mind. I also liked the idea of including an oak branch in my design, since the oak is America’s national tree and a symbol of strength.

I began my research by gathering images of every previous American coin design I could find that includes an eagle. I knew these were numerous, but there are more than I expected! My aim was to illustrate a unique pose not previously seen on an American coin, so I needed to see what had already been done.
With all that in mind, I then viewed many photos and videos of bald eagles, using several images as inspiration for sketches. I ultimately developed one of those sketches into the design that shows a bald eagle about to land on its nest, bringing an oak branch for nest construction. The branch is identifiable as oak by the few attached leaves. At some point, however, it occurred to me that bald eagles typically build their nests before the oaks leaf out. Fortunately, a bit of research led me to understand that eagles also occasionally add to or repair their nests throughout the year, so leaves on the branch are realistic.
The inscriptions—and there are quite a few— were also something I carefully considered in my design. I spent hours selecting the typefaces and tweaking the placement and spacing of every word. I chose typefaces that are readable and coinable at a small size and offer a sense of gravitas and grace, sifting through a number of options to find ones designed by Americans: P22 Mackinac Pro and Trebuchet MS. I wanted every aspect of this coin to be American.

I took great care and pride in designing the reverse side of this coin, and I feel very fortunate to have had this design opportunity. 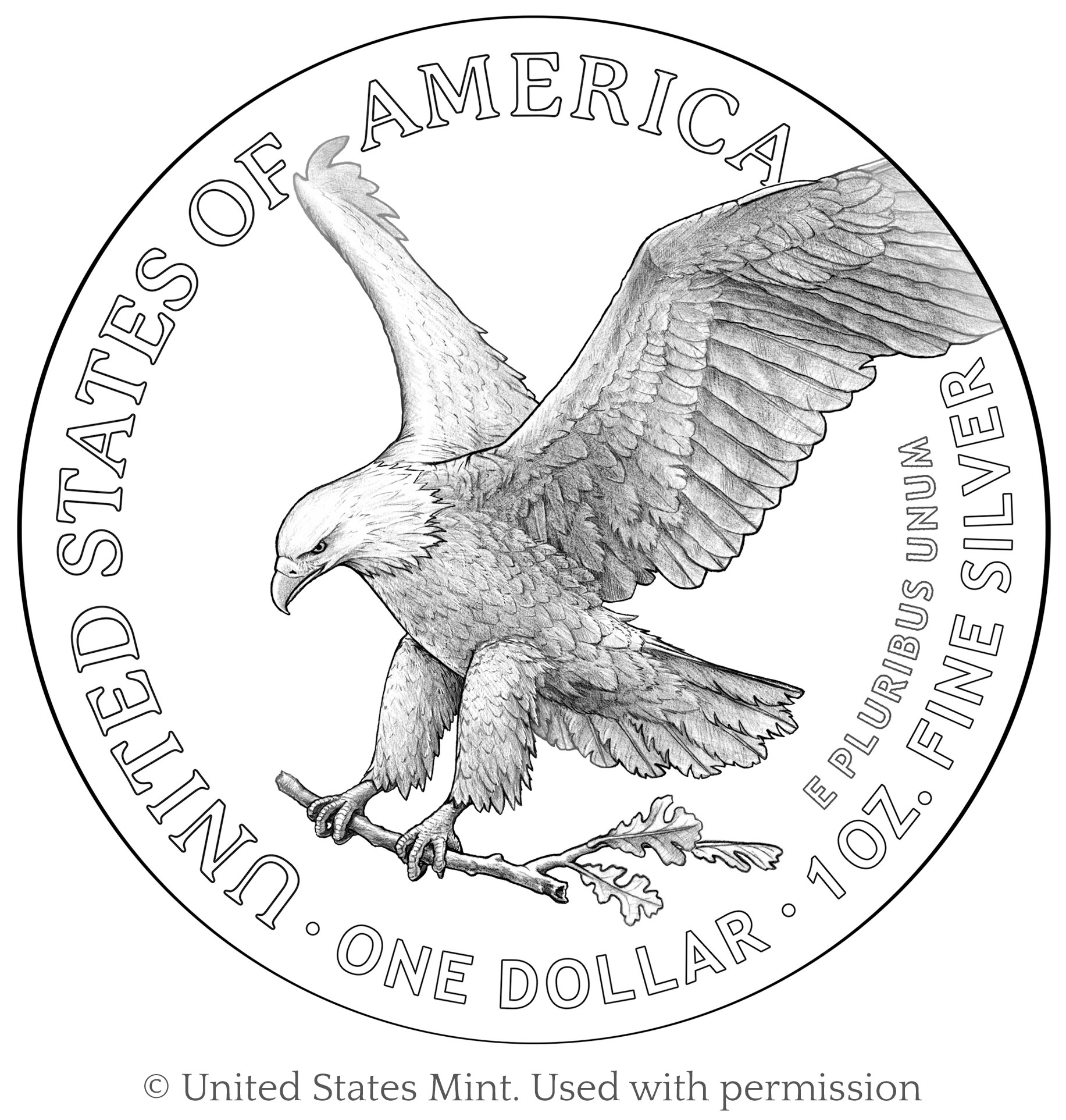 Wow!! You are so talented.

Thank you Robin and Patti!