On March 21, 2018 at the United States Capitol Visitors Center, a Congressional Gold Medal Ceremony honored the men and women who served in the Office of Strategic Services (OSS) in World War II. The OSS was America’s first spy agency—the forerunner to the CIA. A brief synopsis of the OSS and details about the medal are here.

My miniscule connection to this esteemed group of people is that I designed the gold medal being awarded. The United States Mint produces the Congressional Gold Medals, and because I am part of the Mint’s Artistic Infusion Program, I was one of the artists invited to submit designs for the OSS medal. I feel privileged to have made a small contribution toward honoring courageous people who served in the OSS, many of whom joined despite the promise that it would be dangerous.

Photographs of the actual gold medal may be seen here.

I have to admit that I’d never heard of the OSS before setting out to design the medal, but its compelling history made for enjoyable research. While learning about about the organization through various resources, I jotted down ideas about possible design elements. An obvious device might have been the figure of William J. Donovan, the man who headed the OSS from its inception. His leadership was central to the organization. However, it was important to recognize all of the people who served, since all of them were (collectively) receiving the medal. For this reason, it just wasn’t appropriate to include General Donovan or any other specific individual in the design.

One theme that permeated my reading was the clandestine nature of the OSS. I knew I wanted to include people in my obverse design, but how could I convey their anonymity? I decided to draw the figures as outlines only:  A woman whose crossed arms project her determination; a daring paratrooper; and a man whose casual but confident stance hints at the OSS recruitment strategy of seeking well-educated people who could win a bar fight. I liked the idea that the two people in civilian clothes could be anyone in the organization, from office workers to spies, and that the third figure highlights to the military’s involvement. These figures are partially concealed behind the large inscription ‘OSS,’ its letters a nod to those on the OSS pin.

I noticed that OSS history is peppered with code words and phrases—a theme of spy movies and real spy agencies. I liked the idea of including some of these on the medal because—by definition—the codes refer to specific people and missions but in a secretive way. Quite a few of the codes ended up on my reverse design, in a typeface reminiscent of a 1940s typewriter. The OSS spearhead insignia is engraved in the midst of the codes. To acknowledge General Donovan’s importance to the OSS, I placed the code for him—109—right in the center of the spear point. 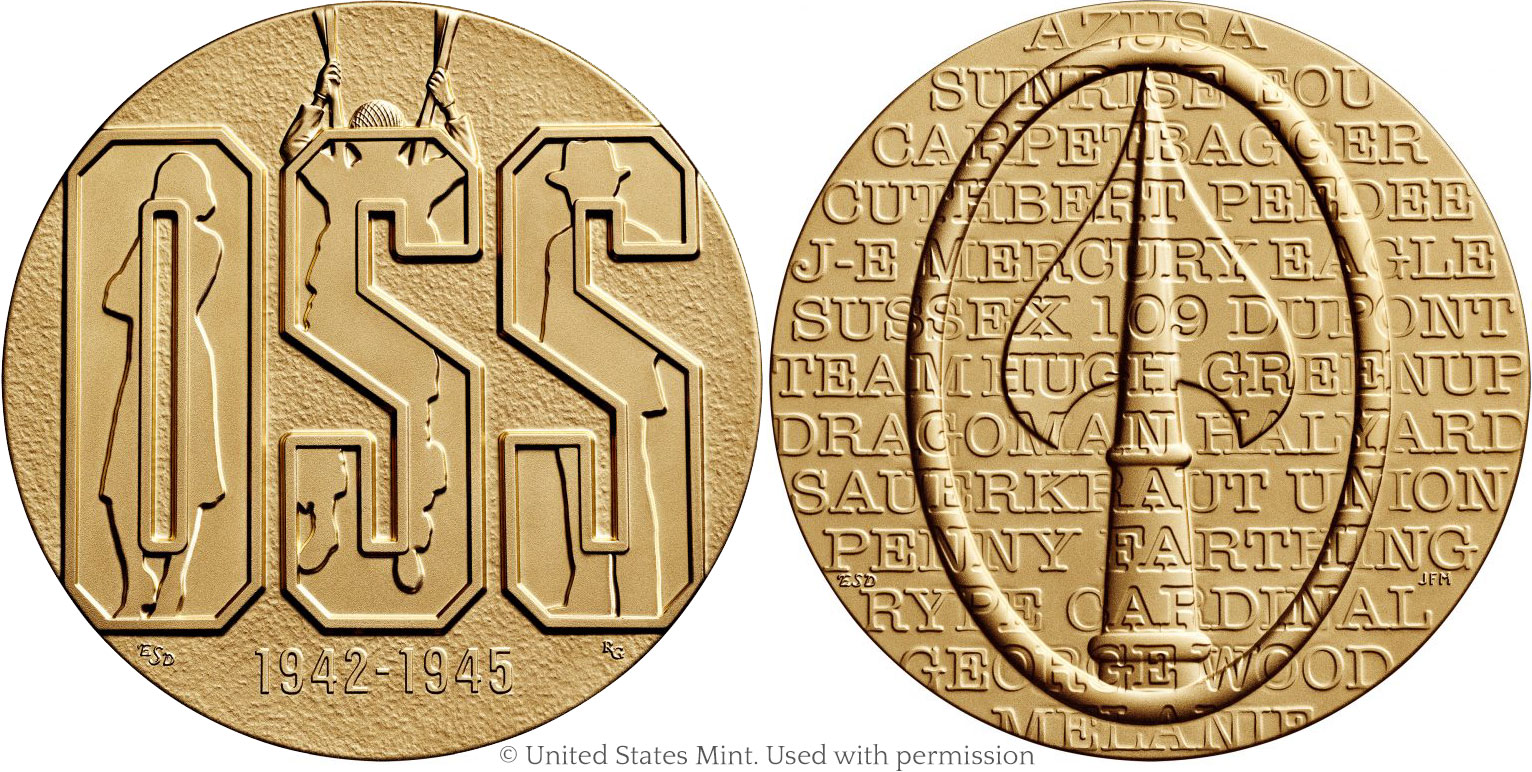 The bronze replica of the Congressional Gold Medal to honor those who served in the Office of Strategic Services. © United States Mint. Used with Permission.
United States Mint Sculptor-Engravers Renata Gordon (obverse) and Joseph Menna (reverse) sculpted this medal.

The Mint offers bronze replicas of the medal.

Great job! Thanks for sharing your thought process on how you came up with the design. You do a great job distilling a lot of concepts into a small space.

Thanks so much, Gerrie and Karen!