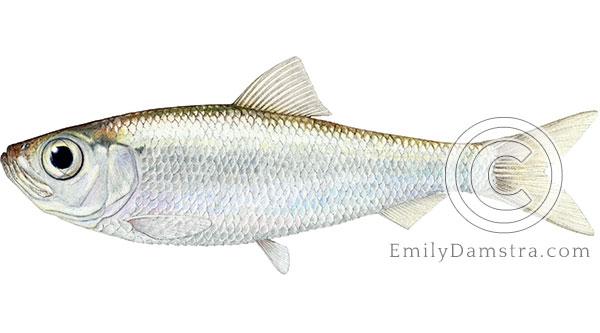 The Death and Life of the Great Lakes (publisher’s synopsis here) was indeed a great read. Having lived in the Great Lakes region my whole life, I was embarrassingly ignorant about the history of its manipulation by humans, and I didn’t realize the magnitude of the effects invasive species are having on the huge lakes (even though I’ve illustrated some of the invaders, including the alewife above which appears in the book). Egan is adept at illuminating the history and science in a way that reads more like a novel than a nonfiction book. There were moments when my jaw dropped, stories that had me despairing over man’s follies, and passages that gave me new insights about the region I inhabit. He also explains how what happens in the Great Lakes has geographically far-reaching consequences for any body of water that is connected to the Great Lakes, including seemingly distant waters in the American west. I cannot recommend this book highly enough. It’s relevant to everyone.

Considering the depth and breadth of Egan’s research and the superb quality of his writing, there’s no question that my illustrations play a minuscule role in the book, but I’m proud they’re there. One thing I love about my job is that it frequently leads me to learn new things about the world, sometimes via unexpected routes.